October is Breast Cancer Awareness month. According to the American Cancer Society, in 2011 there were estimated to be 230,000 new cases of breast cancer and about 40,000 deaths from breast cancer. In 2008, more than 2.6 million living women were breast cancer survivors.

One thing we know quite well is that mammograms are an important tool in the early detection of breast cancer. With early detection, there is a far greater hope of catching the disease in its early stages where treatments can be less invasive (lumpectomy rather than mastectomy, for example) and where there is a higher chance of curing the disease.

But what is not well known is that in women with dense breast tissue, mammograms miss more cancers than they detect! In August, 2012, the National Cancer Institute (NCI) released a study of 9,000 women with breast cancer. Although they found that having denser breasts did not result in a higher mortality from breast cancer, data from this study demonstrated that while about 75% of study participants with the densest breasts had a mammogram within the previous two years, mammograms only detected about 25% of the cancers. Only 1 in 4 cancers in those women with dense breast tissue were found by mammogram alone.

Other facts about breast tissue density:

What is breast density?
Most of the tissue in the female breast is fatty tissue which is soft. X-Rays penetrate fatty tissue with ease (showing black or grey on imaging) and since breast cancers show up as white specks on mammograms, they are easier to detect when there is more fatty breast tissue present. Dense breast tissue is when there are more glands and fibrous tissue relative to fat. Dense breasts are harder to read on a mammogram because the dense tissue shows up as white, the same way a tumor does.

Most women do not know their own breast tissue density, but this changing. So far there are 6 states that legally require radiologists to report on breast density when they interpret a mammogram. Informing women about their breast density has been the law in Connecticut since 2009.  Recently published results from the Connecticut experience have shown that early detection of breast cancer in women with dense breast tissue has DOUBLED in Connecticut since the passage of this law. (Click here for more information).

New Law in California
California is the 6th and newest state to adopt this type of law (which takes effect April 1, 2013). On September 22, 2012 a press release announced that “Governor Jerry Brown has signed a bill to improve breast cancer detection in women with dense breast tissue. Senate Bill 1538, authored by State Senator Joe Simitian (D-Palo Alto), will require that following a mammogram, women with dense breast tissue be informed of the following:

Screening Options for Women with Dense Beast Tissue (DBT)
The best option for screening for early detection of breast cancer in women with dense breasts is to use some type of breast ultrasound. MRI has been used for this as well, but MRI is very costly, as high as $1,500 to $2,000 for a single exam and MRI has a high rate of false positive findings.

Breast ultrasound is not a new technology but to date is used almost exclusively as a diagnostic test. Basically, women with a palpable lump or lumps will have an ultrasound of the palpable areas to determine if those lumps are simple cysts, fibrocystic changes or suspicious for cancer.

Breast ultrasound for screening is a fairly recent innovation. The technology is different because it involves complete imaging of both breasts.

The somo•v® Platinum Automated Breast Ultrasound (ABUS) system
On Sep 18th, “U-Systems, the leader in automated breast ultrasound, announced today that the somo•v® Automated Breast Ultrasound (ABUS) system has been approved by the U.S. Food and Drug Administration’s (FDA) for breast cancer screening as an adjunct to mammography for asymptomatic women with dense breast tissue. With the approval, the somo•v ABUS system becomes the only device approved specifically for screening women with dense breasts.”

According to Rachel Brem, M.D., Director of Breast Imaging at The George Washington University Hospital, Washington D.C. “Mammography is an effective tool at finding breast cancer, but it doesn’t work equally well in everyone. Recently completed studies demonstrated with the addition of ABUS we find about 30 percent more cancers in women who have normal mammogram, normal physical examination and dense breasts. For the more than 40 percent of women who have dense breasts, this is a significant advancement in their breast healthcare.”

At the time of writing this article, there was no way to determine from the company web site any locations offering this technology. 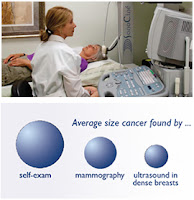 SonoCiné Automated Whole Breast Ultrasound (AWBU)*
SonoCiné is an automated breast ultrasound system that has been cleared by FDA as an adjunctive examination to mammography. It is a complimentary examination and not a replacement for mammography. Peer reviewed, published, clinical trials demonstrated that SonoCiné, when used as an adjunct to mammography, found more and smaller cancers than were found by mammography alone. SonoCiné is now available in Pasadena at the Pasadena Breast Ultrasound Center. The Medical Director is Kevin Kelly, M.D., who invented SonoCiné. Located at 960 E Green St., Suite 210, Pasadena, CA, (626) 381-9430.
Conclusion
Dense Breast Tissue (DBT) makes it more difficult to interpret a mammogram. Women with DBT need to be informed of this fact and by law in California will be so informed starting April 1st next year if not sooner. This will allow women with DBT to make an informed decision as to whether or not they should consider additional breast cancer screening tests. This decision can be made by consulting their gynecologist who can help them review their personal and family history to determine if there are any additional risk factors for breast cancer that might warrant further screening tests after a normal mammogram.

*Dr. Jick wishes to disclose that he is an investor in the SonoCiné company.
Posted by Bryan S. Jick, M.D. at 6:15 AM 4 comments: Links to this post