Why did 39 year old actress Angelina Jolie have her ovaries removed?

The news was shocking. Famous Hollywood actress has major surgical procedure to reduce her risk for getting cancer. Why did she do this and what else can we learn from this?

In 2013, Angelina Jolie had bilateral mastectomies with reconstruction. After battling ovarian cancer for years, Jolie's mother died at age 56. Jolie has lost her mother, aunt and grandmother to cancer. In 2013, she tested positive for a genetic mutation called BRCA1 (1). ("pronounced braca-1") . Patients with this mutation have a very high risk of developing breast or ovarian cancer. If someone with this mutation does not have cancer, they still need to be followed closely by specialists to monitor for early signs of possible cancer. Sometimes these patients take medication or even have surgery to reduce their risk of developing cancer (called "risk-reduction" surgery). This is why Jolie had both breasts removed. Her risk of breast cancer was about 90% due to the BRAC1 mutation and she wanted to prevent this from happening.
In her recent article published online last week, Jolie reveals that as far back as 2013, she knew that one day she would need to have her ovaries removed also. Her decision to do this surgery now was based on some blood work that showed positive markers in the blood that were interpreted as possibly pre-cancerous. But Jolie cautions that all women with BRCA1 do not need to do this surgery. In consultation with her surgeon, her choice was based on a combination of her strong family history of cancer, including ovarian cancer, the fact that her mother was diagnosed at age 49, plus the presence of these newly discovered markers in her blood. Luckily, her tissues were negative for any signs of ovarian cancer.

There are other mutations that increase the risk for cancer

Myriad Genetics, Inc., the originator of the BRCA1 and BRCA2 DNA tests (1) has been testing patients for these mutations for years but they have also been doing research on other DNA mutations that increase the risk for cancer. Lynch syndrome causes a high risk for colon and uterine cancer and is caused by a genetic mutation. Other mutations are known to increase the risk for melanoma, prostate and pancreatic cancers and others.

Why are these mutations so scary?

Cancer causing mutations are inherited as autosomal dominant. This means that even one mutation from one parent is enough to cause actual or potential harm. Most mutations we know about are autosomal recessive and those are harmless when someone inherits just one (cystic fibrosis mutation for example). Recessive mutations still can cause serious disease, but only when a person inherits two of them (one from each parent). It only takes one autosomal dominant mutation from one parent to lead to real or potential disease.

Myriad has developed a new blood test, called the myRisk Hereditary Cancer panel, that can check for many different autosomal dominant mutations, all of which are known to increase a person's risk for up to 8 different types of cancer (2). This test is called the myRisk™ Hereditary Cancer panel**.
This panel includes the tests for BRCA1/2 and Lynch syndrome but adds other tests, increasing the likelihood of discovering if someone is carrying a mutation that increases their risk for developing certain types of cancer.

A false negative test is one of the worst types of medical tests. This is when a person has a known condition but when we test them for it, the test comes back negative. When a patient tests negative for a scary condition, there is immediate relief for both the patient and the doctor, but if the test is a false negative, this is not a good thing. This provides a false sense of reassurance because the patient will not be sent for any additional testing or monitoring, potentially allowing their undiagnosed condition to worsen and progress.

Imagine that you suspect an intruder is hiding in your home. You hire a professional to search your home and are told that the "coast is clear." But the professional did not search insider your guest shower stall. If this is where the intruder happened to hide, then the search was a false negative. Or maybe there was no intruder there at all? The only way to know for sure would have been to perform a better search.

Who should consider having this Hereditary Cancer test?

Due to the high cost of this test, only people with a family history of specific types of cancer are considered candidates at this time. *(includes breast, ovarian, colon, uterine, melanoma, pancreas, stomach and prostate). The cost for this test today is the same as the cost in the past for just the BRCA1/2 test and Myriad is confident that most major insurance providers will cover this cost. It is much more cost effective to prevent cancer than to treat it! 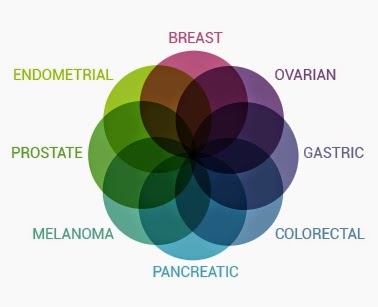 If any of the following situations apply, Myriad labs would recommend the myRisk test:
If a patient tests positive for a cancer-causing genetic mutation, Myriad's report provides a great deal of information about the test, the condition itself, the person's predicted risk and also medical management for surveillance and cancer risk reduction. If someone tests positive for one mutation, their close relatives also should have the test done.

Myriad provides a quick online tool that you can use to check your risk for having one of the cancer-causing autosomal dominant mutations tested for by the myRisk test. If you use this online tool, you can print the results yourself, or choose to submit them online to Dr. Bryan Jick at Fair Oaks Women's Health in Pasadena, California where you can get the myRisk test done, Monday through Friday, 8 am to 4 pm, by appointment. Please call Fair Oaks Women's Health at (626) 304-2626 and ask for a cancer risk assessment appointment with our Nurse Practitioner.

Many of us have a family history of cancer. We wonder if we are going to get cancer ourselves. Now there is an online screening tool and a useful blood test to help us determine if we are at increased risk for certain types of cancer. If we test positive, there are many cancer-prevention, risk-reduction and monitoring options available for us, which will be included in a detailed scientific report provided by Myriad Genetics.
Notes
1. The genetic basis of HBOC is a germline (inherited) mutation in either the BRCA1 or BRCA2 genes. Normally, the proteins produced by the BRCA1 and BRCA2 genes prevent cells from becoming malignant by aiding in the repair of mutations in other genes through a process known as double-stranded DNA repair. Therefore, an inherited mutation in either of these genes, also known as tumor suppressor genes, greatly increases the probability of malignant transformation and cancer.   Approximately 7% of breast cancer and 11 - 15% of ovarian cancer cases are caused by BRCA1 or BRCA2, which are inherited in an autosomal dominant pattern. When assessing hereditary cancer risk, a patient's personal and family history is collected to investigate the risk for HBOC. Once a patient is identified as being at increased risk of HBOC, genetic test results provide the most accurate means of cancer risk assessment for a patient.
2. Myriad myRisk™ Hereditary Cancer panel is a scientific advancement revolutionizing hereditary cancer testing. Blending both genetic test status AND personal cancer family history, Myriad myRisk hereditary cancer panel represents the next generation of hereditary cancer risk testing. Myriad myRisk identifies elevated risk for 8 important cancers (includes breast, ovarian, colon, uterine, melanoma, pancreas, stomach and prostate) by analyzing multiple, clinically significant genes. Additionally, Myriad myRisk provides a summary of available medical society guidelines to help you optimize your patients' medical management. Be confident you know your patients' cancer risks and appropriate follow-up management with Myriad myRisk Hereditary Cancer.
Posted by Bryan S. Jick, M.D. at 1:00 PM